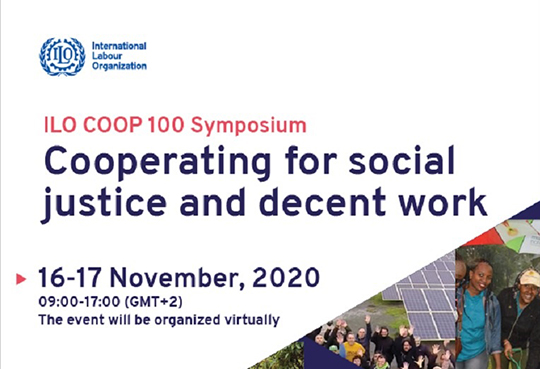 To mark the 100th anniversary of its Cooperatives Unit (COOP), the ILO brought together policy makers, researchers and practitioners working with cooperatives and the wider social and solidarity economy (SSE) for a two-day international symposium.

Established with the adoption of Albert Thomas’s proposal during the third session of the ILO’s Governing Body in March 1920, the ILO marks the Centenary of its Cooperatives Unit in 2020.  The ILO held an international symposium on 16-17 November 2020 to celebrate the 100th anniversary of its Cooperatives Unit (COOP). The ILO COOP 100 Symposium titled “Cooperating for Social Justice and Decent Work” highlighted the contribution of cooperatives and the wider social and solidarity economy (SSE) in advancing social justice, decent work and the sustainable development agenda. It brought together policy makers, researchers and practitioners who reflected on historical perspectives, legal and policy frameworks, measurement, management, sustainability, platform economy and future of work issues among others. Held virtually, the event was broadcast live and Agricultural Credit Cooperatives of Turkey followed the two-day symposium.

The ILO COOP 100 Symposium began with the video messages from Mr Guy Ryder, Director-General of the ILO and Mr Ariel Guarco, President of the ICA. Following the opening remarks, four sessions were held on social and solidarity economy (SSE), cooperative legislation and policy, and statistics of cooperatives and SSE. Two publications were launched at the end of the first day, which are “Statistics of Cooperatives: Concepts, classification, work and economic contribution measurements” and “A Virtual Retrospective Issue of the Annals of Public and Cooperative Economics marking ILO COOP Centennial: Cooperatives and the ILO over 100 Years: A selection of 12 Articles”.

The ILO remains the only specialized agency of the United Nations with an explicit mandate on cooperatives. The ILO Promotion of Cooperatives Recommendation, 2002 (No.193) sets the international labour standard on cooperatives,  recognizing the importance of cooperatives in job creation, mobilizing resources, generating investment and their contribution to the economy, and that cooperatives in their various forms promote the fullest participation in the economic and social development of all people. The ILO views cooperatives as important in improving the living and working conditions of women and men globally as well as making essential infrastructure and services available even in areas neglected by the state and investor-driven enterprises. The event showed that for over a century, cooperatives have been an important partner of the ILO in achieving a decent, human centered work agenda for a fair, secure and inclusive future of work. As cooperatives have a proven record of creating and sustaining employment all around the world – they are estimated to provide at least 279 million jobs today; it was stated that they contribute to promoting decent work and advancing sustainable development goals as well as responding to the COVID-19 pandemic as key community actors. Copyright © 2023 All Rights Reserved By Agricultural Credit Cooperatives of Turkey.