International Day of Awareness of Food Loss and Waste 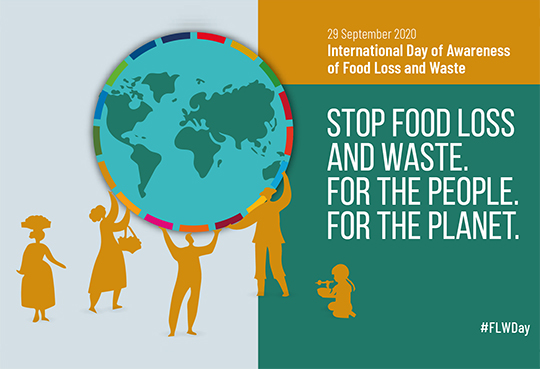 According to the UN Resolution numbered 74/209 adopted by the United Nations General Assembly on December 19, 2019, "September 29" is designated as the International Day of Awareness of Food Loss and Waste  (IDAFLW). It was celebrated for the first time this year with a global virtual meeting held by the UN Food and Agriculture Organization (FAO), the UN Environment Programme and its partners.

Agricultural Credit Cooperatives of Turkey was present at the event and contributed to raising public awareness on the IDAFLW and the food loss and waste reduction through social media.

Minister of Agriculture and Forestry of the Republic ofTurkey Dr Bekir Pakdemirli participated to the event as a speaker, along with other distinguished spreakers including Qu Dongyu, Director-General of FAO; Inger Andersen, Executive Director of the UN Environment Programme; Luis Basterra, Minister of Agriculture, Livestock and Fisheries of Argentine Republic; Maria Ubach Font, Minister of Foreign Affairs of the Principality of Andorra; Luca Beccari, Minister of Foreign Affairs, International Economic Cooperation and Telecommunications of the Republic of San Marino; Gilbert F. Houngbo, President, International Fund for Agriculture Development; Martien van Nieuwkoop, Global Director for Agriculture and Food, World Bank. UN Secretary General António Guterres attended the event with a video message as well.

The observance of the First International Day of Awareness of Food Loss and Waste (IDAFLW) on 29 September 2020 made a clear call to action to reduce food loss and waste toward ensuring food security. While more than 670 million adults, 120 million children (5-19 years old) are obese and 830 million people, including 40 million children under the age of 5, are overweight, more than 820 million people, most of whom are children, are starving in the world. It was stated that food security of more people are under threat due to reasons such as the COVID-19 pandemic and climate change.

Data on food loss and waste was also shared in the speeches delivered at the event. It is pointed out that 14 percent of the food produced in the world is lost between harvest and retail and food loss costs 400 billion dollars annually. Food loss and waste causes approximately 1.5 billion tons of greenhouse gas equivalent to carbon dioxide and constitutes 8 percent of the global greenhouse gas emissions. As the COVID-19 pandemic continues, that there has been a very serious increase in food loss and waste, and high levels of losses have occurred in perishable agricultural products and in the supply chain due to movement restrictions that prevent the transport of food to the market or the access of consumers to the market.

In the light of this data and considering the increasing world population, it was emphasized that the food system, including the supply chain, needs to be redesigned to to ensure food security, and the causes of food losses and waste should be determined as soon as possible and actions should be taken to reduce and prevent it. To achive this, it has been stated that stakeholders such as international organizations, governments, producers, suppliers, distributers, businesses, consumers, non-governmental organizations and academia should work together to find innovative solutions.

Within the 17 UN Sustainable Development Goals,  the Sustainable Development Goal 12 (SDG 12) on Responsible Consumption and Production sets out a target (12.3); “by 2030 halve per capita global food waste at the retail and consumer level, and reduce food losses along production and supply chains, including post-harvest losses”. It is said that, thanks to the reduction of food losses and waste, it will positively affect many other SDGs, along with the SDG 12. By reducing food loss and waste, it will be possible to ensure food security and access to food, increase productivity and economic growth and reduce greenhouse gas emissions as well as pressure on land and water resources.

Speaking at the event, Agriculture and Forestry Minister Bekir Pakdemirli stated that Turkey brought the food loss and waste issues on the world agenda during its G20 presidency in 2015. Minister Pakdemirli explained the attempt to establish a Technical Platform on the Measurement and Reduction of Food Loss and Waste with the FAO and the International Food Policy Research Institute (IFPRI) and the studies conducted in this context.

In Turkey, every year about 19 million tons of food is wasted, which is around one fifth of the production and food loss and waste level is around 40 percent. The Minister explained that If 5 percent of the current food loss and waste was prevented, the money saved would be equal to the minimum wage of 1 million people. As the figures show, combating food loss and waste is also important for the country's economy.

Minister Pakdemirli announced that the National Strategy Document and the Action Plan h prepared with the FAO and he launched the FAO-Turkey Partnership Program, fully funded by the Turkish government, aiming to provide support to ensuring food security and rural poverty reduction in Turkey and and Central Asia. The Minister explained the national campaign called "Save Your Food" which is carried out within the scope of the project and has reached 21 million people so far through digital and social media. With this awareness created, the second phase of the campaign will start in October to take action to reduce food loss and waste. Besides, guidelines will be developed at the farm, retail, and HoReCa level to reduce food losses.

Speakers addressed issues such as the need to take long-term actions to prevent food loss and waste rather than reducing it, capacity building for food production, storage, distribution, education of young people, creating more conscious consumers, changing consumption habits, providing digital transformation, conducting research and accessing data. It was concluded that both the public (national or local authorities) and the private (businesses and individuals) sectors should cooperate to bolster efforts to reduce food loss and waste at local, national and global level.

Copyright © 2020 All Rights Reserved By Agricultural Credit Cooperatives of Turkey.